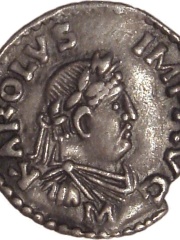 Charlemagne ( SHAR-lə-mayn, -⁠MAYN, French: [ʃaʁləmaɲ]) or Charles the Great (Latin: Carolus Magnus; German: Karl der Große; 2 April 747 – 28 January 814), a member of the Carolingian dynasty, was King of the Franks from 768, King of the Lombards from 774, and the first Holy Roman Emperor from 800. Charlemagne succeeded in uniting the majority of western and central Europe and was the first recognized emperor to rule from western Europe after the fall of the Western Roman Empire around three centuries earlier. The expanded Frankish state that Charlemagne founded was the Carolingian Empire. Read more on Wikipedia

Charlemagne was the first Holy Roman Emperor. He is most famous for uniting Western Europe and expanding the Frankish Kingdom into an empire that covered much of Western and Central Europe.

Page views of Charlemagnes by language

Among politicians, Charlemagne ranks 10 out of 15,577. Before him are Louis XIV of France, Joseph Stalin, Cleopatra, Vladimir Lenin, Thomas Jefferson, and Augustus. After him are Mustafa Kemal Atatürk, Vladimir Putin, Suleiman the Magnificent, David, Saladin, and Elizabeth I of England.