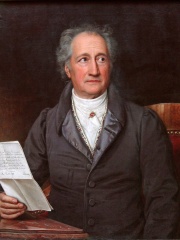 Johann Wolfgang von Goethe (28 August 1749 – 22 March 1832) was a German poet, playwright, novelist, scientist, statesman, theatre director, and critic. His works include plays, poetry, literature, and aesthetic criticism as well as treatises on botany, anatomy, and colour. He is widely regarded as the greatest and most influential writer in the German language, his work having a profound and wide-ranging influence on Western literary, political and philosophical thought from the late 18th century to the present day.Goethe took up residence in Weimar in November 1775 following the success of his first novel, The Sorrows of Young Werther (1774). Read more on Wikipedia

Johann Wolfgang von Goethe is most famous for his novel, Faust. The novel tells the story of a man who sells his soul to the devil in exchange for power and knowledge.