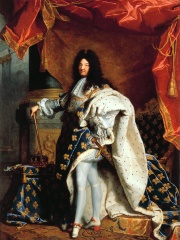 Louis XIV (Louis Dieudonné; 5 September 1638 – 1 September 1715), known as Louis the Great (Louis le Grand) or the Sun King (le Roi Soleil), was King of France from 14 May 1643 until his death in 1715. His reign of 72 years and 110 days is the longest recorded of any monarch of a sovereign country in European history. Louis XIV's France was emblematic of the age of absolutism in Europe.Louis began his personal rule of France in 1661, after the death of his chief minister, the Italian Cardinal Mazarin. Read more on Wikipedia

Since 2007, the English Wikipedia page of Louis XIV of France has received more than 15,206,855 page views. His biography is available in 116 different languages on Wikipedia making him the 5th most popular politician.

Page views of Louis XIV of Frances by language

Among politicians, Louis XIV of France ranks 5 out of 14,801. Before him are Napoleon, Adolf Hitler, Julius Caesar, and Donald Trump. After him are Joseph Stalin, Thomas Jefferson, Augustus, Vladimir Lenin, Mustafa Kemal Atatürk, Charlemagne, and Elizabeth I of England.