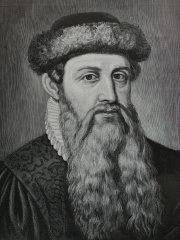 Johannes Gensfleisch zur Laden zum Gutenberg (; c. 1400 – February 3, 1468) was a German inventor, printer, publisher, and goldsmith who introduced printing to Europe with his mechanical movable-type printing press. His work started the Printing Revolution in Europe and is regarded as a milestone of the second millennium, ushering in the modern period of human history. It played a key role in the development of the Renaissance, Reformation, Age of Enlightenment, and Scientific Revolution, as well as laying the material basis for the modern knowledge-based economy and the spread of learning to the masses.While not the first to use movable type in the world, in 1439 Gutenberg was the first European to do so. Read more on Wikipedia

Johannes Gutenberg is most famous for inventing the printing press in the 1400s.

Among INVENTORS In Germany