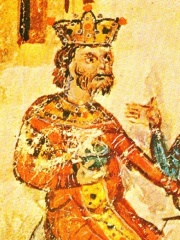 Krum (Bulgarian: Крум, Greek: Κρούμος/Kroumos), often referred to as Krum the Fearsome (Bulgarian: Крум Страшни) was the Khan of Bulgaria from sometime between 796 and 803 until his death in 814. During his reign the Bulgarian territory doubled in size, spreading from the middle Danube to the Dnieper and from Odrin to the Tatra Mountains. Read more on Wikipedia

Since 2007, the English Wikipedia page of Krum has received more than 253,938 page views. His biography is available in 45 different languages on Wikipedia. Krum is the 2,064th most popular politician (up from 2,097th in 2019), the 32nd most popular biography from Serbia (down from 28th in 2019) and the 24th most popular Serbian Politician.

Page views of Krums by language

Among politicians, Krum ranks 2,064 out of 15,710. Before him are Ziying, Nicolas Fouquet, Tiberius III, Masoud Barzani, Ismail II, and Hermann Müller. After him are Frederick III of Sicily, Nicos Anastasiades, Nadab of Israel, Konstantin Päts, Ambiorix, and Géza II of Hungary.