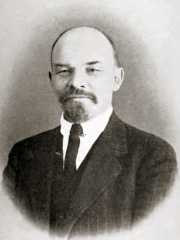 Vladimir Ilyich Ulyanov (22 April [O.S. 10 April] 1870 – 21 January 1924), better known as Vladimir Lenin, was a Russian revolutionary, politician, and political theorist. He served as the first and founding head of government of Soviet Russia from 1917 to 1924 and of the Soviet Union from 1922 to 1924. Under his administration, Russia, and later the Soviet Union, became a one-party socialist state governed by the Communist Party. Read more on Wikipedia

Vladimir Lenin is most famous for the Bolshevik Revolution of 1917, which led to the establishment of the Union of Soviet Socialist Republics.

Among politicians, Vladimir Lenin ranks 7 out of 15,577. Before him are Napoleon, Adolf Hitler, Julius Caesar, Louis XIV of France, Joseph Stalin, and Cleopatra. After him are Thomas Jefferson, Augustus, Charlemagne, Mustafa Kemal Atatürk, Vladimir Putin, and Suleiman the Magnificent.