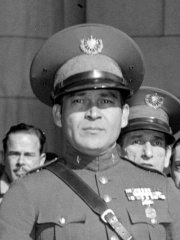 Fulgencio Batista y Zaldívar (; Spanish: [fulˈxensjo βaˈtista i salˈdiβaɾ]; born Rubén Zaldívar, January 16, 1901 – August 6, 1973) was a Cuban military officer and politician who served as the elected president of Cuba from 1940 to 1944 and as its U.S.-backed military dictator from 1952 to 1959, when he was overthrown by the Cuban Revolution. Batista initially rose to power as part of the 1933 Revolt of the Sergeants, which overthrew the provisional government of Carlos Manuel de Céspedes y Quesada. Batista then appointed himself chief of the armed forces, with the rank of colonel, and effectively controlled the five-member "pentarchy" that functioned as the collective head of state. Read more on Wikipedia

Fulgencio Batista was the dictator of Cuba from 1952 to 1959. He was overthrown by Fidel Castro and the Cuban Revolution.

Among politicians, Fulgencio Batista ranks 514 out of 15,577. Before him are Moctezuma II, Syngman Rhee, Didius Julianus, Ludwig II of Bavaria, Aurelian, and Constantine II of Greece. After him are Zhou Enlai, Hans-Adam II, Prince of Liechtenstein, Dmitry Medvedev, Giuseppe Mazzini, François Hollande, and Georgy Malenkov.