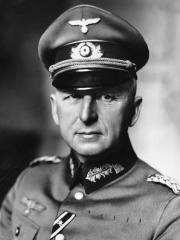 Fritz Erich Georg Eduard von Manstein (born Fritz Erich Georg Eduard von Lewinski; 24 November 1887 – 9 June 1973) was a German Field Marshal of the Wehrmacht during the Second World War, who was subsequently convicted of war crimes and sentenced to 18 years imprisonment. Born into an aristocratic Prussian family with a long history of military service, Manstein joined the army at a young age and saw service on both the Western and Eastern Front during the First World War (1914–18). He rose to the rank of captain by the end of the war and was active in the inter-war period helping Germany rebuild its armed forces. Read more on Wikipedia

Erich von Manstein was a German Field Marshal during World War II. He is most famous for his planning of the invasion of France and the Battle of Kursk.