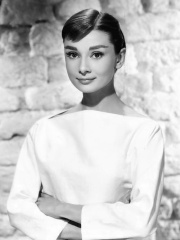 Audrey Hepburn (born Audrey Kathleen Ruston; 4 May 1929 – 20 January 1993) was a British actress and humanitarian. Recognised as a film and fashion icon, she was ranked by the American Film Institute as the third-greatest female screen legend in Golden Age Hollywood, and was inducted into the International Best Dressed List Hall of Fame. Born in Ixelles, Brussels, Hepburn spent parts of her childhood in Belgium, England, and the Netherlands. Read more on Wikipedia

Since 2007, the English Wikipedia page of Audrey Hepburn has received more than 22,926,691 page views. Her biography is available in 101 different languages on Wikipedia making her the 6th most popular actor.

Among actors, Audrey Hepburn ranks 6 out of 8,832. Before her are Charlie Chaplin, Marilyn Monroe, Sylvester Stallone, Bruce Lee, and Alain Delon. After her are Cher, Clint Eastwood, Brigitte Bardot, Marlene Dietrich, Al Pacino, and Marlon Brando.