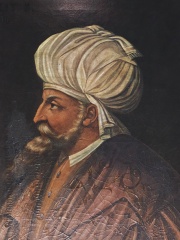 Bayezid II (Ottoman Turkish: بايزيد ثانى, romanized: Bāyezīd-i s̱ānī; Turkish: II. Bayezid; 3 December 1447 – 26 May 1512) was the sultan of the Ottoman Empire from 1481 to 1512. During his reign, Bayezid consolidated the Ottoman Empire, thwarted a Safavid rebellion and finally abdicated his throne to his son, Selim I. Read more on Wikipedia

Bayezid II is most famous for his victory over the crusaders in the Battle of Nicopolis in 1396.

Among politicians, Bayezid II ranks 129 out of 15,577. Before him are Amenhotep III, Lorenzo de' Medici, Xerxes I, Claudius, Mark Antony, and Narendra Modi. After him are Kim Jong-il, Francis I of France, Mehmed IV, Murad II, George W. Bush, and Deng Xiaoping.

Among people born in 1447, Bayezid II ranks 1. After him are Chenghua Emperor, Albert IV, Duke of Bavaria, Catherine of Genoa, Philippe de Commines, Maria of Serbia, Queen of Bosnia, Giovanni Antonio Amadeo, Pietro Riario, and Eberhard II, Duke of Württemberg. Among people deceased in 1512, Bayezid II ranks 2. Before him is Amerigo Vespucci. After him are Gaston of Foix, Duke of Nemours, Sophia Jagiellon, Margravine of Brandenburg-Ansbach, Svante Nilsson, Alessandro Achillini, and Antoine Brumel.