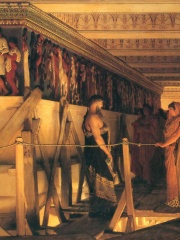 Phidias or Pheidias (; Ancient Greek: Φειδίας, Pheidias; c. 480 – 430 BC) was a Greek sculptor, painter, and architect. His Statue of Zeus at Olympia was one of the Seven Wonders of the Ancient World. Read more on Wikipedia

Since 2007, the English Wikipedia page of Phidias has received more than 573,956 page views. His biography is available in 67 different languages on Wikipedia (up from 63 in 2019). Phidias is the 2nd most popular sculptor, the 20th most popular biography from Greece (up from 23rd in 2019) and the most popular Greek Sculptor.

Phidias is most famous for his work on the Parthenon, which is a temple in Athens.

Page views of Phidias by language

Among sculptors, Phidias ranks 2 out of 190. Before him are Auguste Rodin. After him are Myron, Polykleitos, Praxiteles, Benvenuto Cellini, Lorenzo Ghiberti, Alberto Giacometti, Camille Claudel, Lysippos, Antonio Canova, and Constantin Brâncuși.

Others Deceased in 430 BC