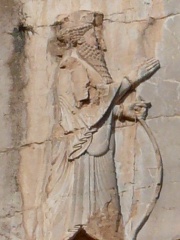 Xerxes I (Old Persian: 𐎧𐏁𐎹𐎠𐎼𐏁𐎠 Xšayār̥šā; Ancient Greek: Ξέρξης Xérxēs; c. 518 – August 465 BC), commonly known as Xerxes the Great, was the fourth King of Kings of the Achaemenid Empire, ruling from 486 to 465 BC. He was the son and successor of Darius the Great (r. 522 – 486 BC) and his mother was Atossa, a daughter of Cyrus the Great (r. 550 – 530 BC), the founder of the Achaemenid empire. Read more on Wikipedia

Since 2007, the English Wikipedia page of Xerxes I has received more than 5,207,631 page views. His biography is available in 73 different languages on Wikipedia (up from 71 in 2019). Xerxes I is the 106th most popular politician (up from 108th in 2019), the 3rd most popular biography from Iran and the most popular Iranian Politician.

Xerxes I was the king of Persia in the 5th century BC. He is most famous for his invasion of Greece, and the Battle of Thermopylae.

Page views of Xerxes IS by language

Among politicians, Xerxes I ranks 106 out of 15,710. Before him are Ivar the Boneless, Cleopatra, Herod the Great, Muammar Gaddafi, Hirohito, and Philip IV of France. After him are Claudius, George Washington, Isabella I of Castile, Pepin the Short, Murad III, and Yasser Arafat.

Others Deceased in 475 BC