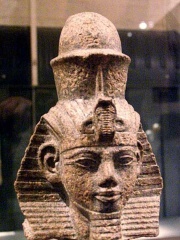 Amenhotep III (Ancient Egyptian: jmn-ḥtp(.w), Amānəḥūtpū pronounced [ʔaˈmaːnəʔ ˈħutpu], "Amun is Satisfied"; Hellenized as Amenophis III), also known as Amenhotep the Magnificent or Amenhotep the Great, was the ninth pharaoh of the Eighteenth Dynasty. According to different authors, he ruled Egypt from June 1386 to 1349 BC, or from June 1388 BC to December 1351 BC/1350 BC, after his father Thutmose IV died. Amenhotep was Thutmose's son by a minor wife, Mutemwiya.His reign was a period of unprecedented prosperity and splendour, when Egypt reached the peak of its artistic and international power. Read more on Wikipedia

Amenhotep III is most famous for his many building projects, including the Luxor Temple and the Colossi of Memnon.

Among politicians, Amenhotep III ranks 123 out of 15,577. Before him are Diocletian, Cyrus the Great, Mustafa I, Murad I, Bayezid I, and Otto I, Holy Roman Emperor. After him are Lorenzo de' Medici, Xerxes I, Claudius, Mark Antony, Narendra Modi, and Bayezid II.