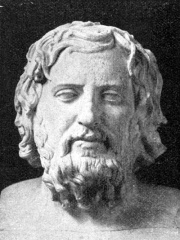 Xenophon of Athens (; Ancient Greek: Ξενοφῶν [ksenopʰɔ̂ːn]; c. 430 – probably 355 or 354 BC) was a Greek military leader, philosopher, and historian, born in Athens. At the age of 30, Xenophon was elected commander of one of the biggest Greek mercenary armies of the Achaemenid Empire, the Ten Thousand, that marched on and came close to capturing Babylon in 401 BC. As the military historian Theodore Ayrault Dodge wrote, "the centuries since have devised nothing to surpass the genius of this warrior". Read more on Wikipedia

Xenophon is most famous for writing the "Anabasis", which is an account of the Greek mercenaries' journey from Mesopotamia to the Black Sea.

Page views of Xenophons by language

Among historians, Xenophon ranks 4 out of 339. Before him are Herodotus, Ibn Khaldun, and Thucydides. After him are Tacitus, Livy, Sima Qian, Josephus, Polybius, Suetonius, Alexis de Tocqueville, and Diodorus Siculus.

Others Deceased in 354 BC