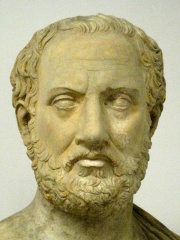 Thucydides (; Ancient Greek: Θουκυδίδης Thoukūdídēs [tʰuːkyːdídɛːs]; c.  460 – c.  400 BC) was an Athenian historian and general. His History of the Peloponnesian War recounts the fifth-century BC war between Sparta and Athens until the year 411 BC. Thucydides has been dubbed the father of "scientific history" by those who accept his claims to have applied strict standards of impartiality and evidence-gathering and analysis of cause and effect, without reference to intervention by the deities, as outlined in his introduction to his work.He also has been called the father of the school of political realism, which views the political behavior of individuals and the subsequent outcomes of relations between states as ultimately mediated by, and constructed upon, the emotions of fear and self-interest. His text is still studied at universities and military colleges worldwide. Read more on Wikipedia

Since 2007, the English Wikipedia page of Thucydides has received more than 2,262,309 page views. His biography is available in 86 different languages on Wikipedia (up from 84 in 2019). Thucydides is the 3rd most popular historian, the 21st most popular biography from Greece (down from 18th in 2019) and the most popular Greek Historian.

Thucydides is most famous for writing a history of the Peloponnesian War.

Page views of Thucydides by language

Among historians, Thucydides ranks 3 out of 341. Before him are Herodotus and Ibn Khaldun. After him are Sima Qian, Tacitus, Livy, Xenophon, Josephus, Polybius, Suetonius, Alexis de Tocqueville, and Diodorus Siculus.

Others Deceased in 397 BC