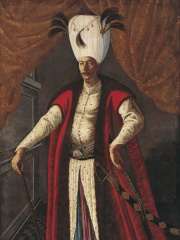 Mehmed IV (Ottoman Turkish: محمد رابع, romanized: Meḥmed-i rābi; Turkish: IV. Mehmed; 2 January 1642 – 6 January 1693) also known as Mehmed the Hunter (Turkish: Avcı Mehmed) was the Sultan of the Ottoman Empire from 1648 to 1687. He came to the throne at the age of six after his father was overthrown in a coup. Mehmed went on to become the second longest reigning sultan in Ottoman history after Suleiman the Magnificent. Read more on Wikipedia

Mehmed IV is most famous for being the Sultan of the Ottoman Empire from 1648 to 1687. He was also the last Sultan to rule from Istanbul.

Among politicians, Mehmed IV ranks 132 out of 15,577. Before him are Claudius, Mark Antony, Narendra Modi, Bayezid II, Kim Jong-il, and Francis I of France. After him are Murad II, George W. Bush, Deng Xiaoping, Harry S. Truman, Henry V of England, and Abdul Hamid II.