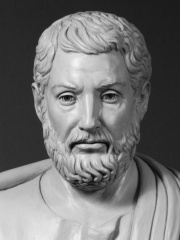 Cleisthenes ( KLYSE-thin-eez; Greek: Κλεισθένης, translit. Kleisthénēs, Attic Greek: [kleːstʰénɛːs]) or Clisthenes (Latin: Clīsthenēs [ˈkliːstʰɛneːs]) was an ancient Athenian lawgiver credited with reforming the constitution of ancient Athens and setting it on a democratic footing in 508 BC. For these accomplishments, historians refer to him as "the father of Athenian democracy." He was a member of the aristocratic Alcmaeonid clan. He was the younger son of Megacles and Agariste making him the maternal grandson of the tyrant Cleisthenes of Sicyon. Read more on Wikipedia

Cleisthenes was most famous for his reforms, which were aimed at creating a more democratic government.

Page views of Cleisthenes by language

Among politicians, Cleisthenes ranks 265 out of 15,710. Before him are Yuri Andropov, Theodore Roosevelt, Yitzhak Rabin, Charles XII of Sweden, Beatrix of the Netherlands, and Martin Bormann. After him are George IV of the United Kingdom, Philippe Pétain, Babur, Louis XVII of France, Matthias Corvinus, and Clara Zetkin.

Others Deceased in 492 BC