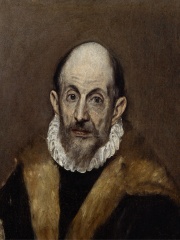 Doménikos Theotokópoulos (Greek: Δομήνικος Θεοτοκόπουλος [ðoˈminikos θeotoˈkopulos]; 1 October 1541 – 7 April 1614), most widely known as El Greco ("The Greek"), was a Greek painter, sculptor and architect of the Spanish Renaissance. "El Greco" was a nickname, a reference to his Greek origin, and the artist normally signed his paintings with his full birth name in Greek letters, Δομήνικος Θεοτοκόπουλος (Doménikos Theotokópoulos), often adding the word Κρής (Krēs), Cretan. El Greco was born in the Kingdom of Candia (modern Crete), which was at that time part of the Republic of Venice, Italy, and the center of Post-Byzantine art. Read more on Wikipedia

Since 2007, the English Wikipedia page of El Greco has received more than 2,056,910 page views. His biography is available in 97 different languages on Wikipedia (up from 95 in 2019). El Greco is the 24th most popular painter, the 14th most popular biography from Greece (down from 12th in 2019) and the most popular Greek Painter.

El Greco is most famous for his use of color and the elongated figures in his paintings.

Among painters, El Greco ranks 24 out of 1,428. Before him are Diego Velázquez, Henri Matisse, Gustav Klimt, Pieter Bruegel the Elder, Donatello, and Titian. After him are Jan van Eyck, Pierre-Auguste Renoir, Édouard Manet, Eugène Delacroix, Hieronymus Bosch, and Wassily Kandinsky.

Among PAINTERS In Greece