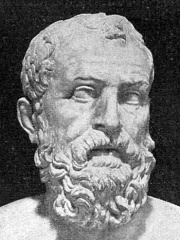 Solon (Greek: Σόλων; c. 630 – c. 560 BC) was an Athenian statesman, constitutional lawmaker and poet. He is remembered particularly for his efforts to legislate against political, economic and moral decline in Archaic Athens. His reforms failed in the short term, yet Solon is credited with having laid the foundations for Athenian democracy. Read more on Wikipedia

Solon was a lawgiver in ancient Athens. He was most famous for his reforms of the Athenian constitution.

Page views of Solons by language

Among politicians, Solon ranks 307 out of 15,577. Before him are Raúl Castro, Sulla, Hugh Capet, Jacques Chirac, Croesus, and Ferdinand II, Holy Roman Emperor. After him are Louis XVIII of France, Sargon of Akkad, Viktor Yanukovych, Park Chung-hee, Christina, Queen of Sweden, and Muawiyah I.

Others Deceased in 558 BC