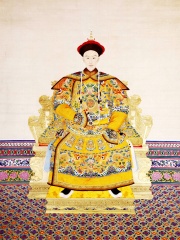 The Guangxu Emperor (14 August 1871 – 14 November 1908), personal name Zaitian, was the tenth Emperor of the Qing dynasty, and the ninth Qing emperor to rule over China proper. His reign lasted from 1875 to 1908, but in practice he ruled, without Empress Dowager Cixi's influence, only from 1889 to 1898. He initiated the Hundred Days' Reform, but was abruptly stopped when the empress dowager launched a coup in 1898, after which he became powerless and was held under house arrest until his death by poisoning. Read more on Wikipedia

The Guangxu Emperor (1871-1908) was the last emperor of the Qing Dynasty. He was most famous for his attempts to modernize China.

Among politicians, Guangxu Emperor ranks 967 out of 15,577. Before him are Astyages, Harold Wilson, Kayqubad I, Gediminas, Lorenzo de' Medici, Duke of Urbino, and James I of Aragon. After him are Peter II of Yugoslavia, Constantine II, Ferdinand I of Romania, Abolhassan Banisadr, Casimir III the Great, and Zewditu.