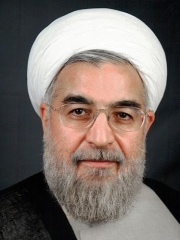 Hassan Rouhani (Persian: حسن روحانی‎, Standard Persian pronunciation: [hæˈsæn-e ɾowhɒːˈniː] (listen); born Hassan Fereydoun (Persian: حسن فریدون‎); 12 November 1948) is an Iranian politician who served as the seventh president of Iran from 3 August 2013 until 3 August 2021. He is also a lawyer, academic, former diplomat and Islamic cleric. He has been a member of Iran's Assembly of Experts since 1999. Read more on Wikipedia

Hassan Rouhani is the current president of Iran. He is most famous for his efforts to improve relations with the United States and other Western countries.

Among politicians, Hassan Rouhani ranks 903 out of 15,710. Before him are Simeon I of Bulgaria, Lev Kamenev, Mahathir Mohamad, Michel Temer, Vlad II Dracul, and Guangxu Emperor. After him are Barbara of Cilli, Amenhotep II, Sibylla, Queen of Jerusalem, Djedefre, Elisabeth of France, and Archduke Karl Ludwig of Austria.