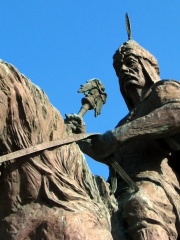 Kayqubad I or Alā ad-Dīn Kayqubād bin Kaykhusraw (Persian: علاء الدين كيقباد بن كيخسرو‎; Turkish: I. Alâeddin Keykûbad, 1190–1237) was the Seljuq Sultan of Rûm who reigned from 1220 to 1237. He expanded the borders of the sultanate at the expense of his neighbors, particularly the Mengujek Beylik and the Ayyubids, and established a Seljuq presence on the Mediterranean with his acquisition of the port of Kalon Oros, later renamed Ala'iyya in his honor. Read more on Wikipedia

Kayqubad I was a sultan of the Seljuk Empire who reigned from 1092 to 1107. He was the son of Alp Arslan and brother of Malik Shah I. He is most famous for his victory over the Byzantine army at the Battle of Manzikert in 1071.

Page views of Kayqubad IS by language

Among politicians, Kayqubad I ranks 1,434 out of 15,710. Before him are Emperor Taizu of Song, Emperor Guangwu of Han, Sunjong of Korea, Millard Fillmore, Jingtai Emperor, and Olybrius. After him are Philip of Swabia, Kurt Schuschnigg, Kim Young-sam, Leo von Caprivi, Tsai Ing-wen, and Alfonso VIII of Castile.