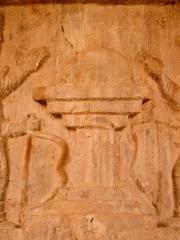 Cyaxares (Ancient Greek: Κυαξάρης; Old Persian: 𐎢𐎺𐎧𐏁𐎫𐎼 Uvaxštra; Avestan: Huxšaθra "Good Ruler"; Akkadian: Umakištar; Old Phrygian: ksuwaksaros; r. 625–585 BC) was the third and most capable king of Media, according to Herodotus, with a far greater military reputation than his father Phraortes or grandfather Deioces. He was the first to divide his troops into separate sections of spearmen, archers, and horsemen.By uniting most of the Iranian tribes of ancient Iran and conquering neighbouring territories, Cyaxares transformed the Median Empire into a regional power. Read more on Wikipedia

Cyaxares is most famous for uniting the Medes and the Persians into one kingdom.

Page views of Cyaxares by language

Among politicians, Cyaxares ranks 1,449 out of 15,710. Before him are Giuliano de' Medici, Duke of Nemours, Soong Ching-ling, Seti II, Béla I of Hungary, Sariputta, and Leo II. After him are Vallabhbhai Patel, Richard of York, 3rd Duke of York, Mentuhotep II, Constantine VIII, Victor Amadeus II of Sardinia, and Amaro Pargo.

Others Deceased in 584 BC