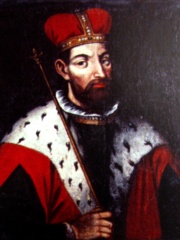 Gediminas (Latin: Gedeminne, Gedeminnus; c. 1275 – December 1341) was the king or Grand Duke of Lithuania from 1315 or 1316 until his death. He is credited with founding this political entity and expanding its territory which later spanned the area ranging from the Baltic Sea to the Black Sea. Read more on Wikipedia

Gediminas was a Lithuanian Grand Duke and King of Lithuania. He is most famous for founding the city of Vilnius.

Page views of Gediminas by language

Among politicians, Gediminas ranks 964 out of 15,577. Before him are Sauli Niinistö, Emperor Yao, George Marshall, Astyages, Harold Wilson, and Kayqubad I. After him are Lorenzo de' Medici, Duke of Urbino, James I of Aragon, Guangxu Emperor, Peter II of Yugoslavia, Constantine II, and Ferdinand I of Romania.

Among people born in 1275, Gediminas ranks 2. Before him is Henry VII, Holy Roman Emperor. After him are Marsilius of Padua, Basarab I of Wallachia, John II, Duke of Brabant, Mondino de Luzzi, Herman, Margrave of Brandenburg-Salzwedel, Edward Bruce, Musō Soseki, and Walter Burley. Among people deceased in 1341, Gediminas ranks 1. After him are Andronikos III Palaiologos, Louis I, Duke of Bourbon, Öz Beg Khan, An-Nasir Muhammad, Irene Palaiologina of Trebizond, John III, Duke of Brittany, Leo IV, King of Armenia, Juliana Falconieri, and Martha of Denmark.