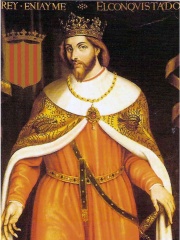 James I of Aragon

James I the Conqueror (Catalan: Jaume el Conqueridor; 2 February 1208 – 27 July 1276) was King of Aragon and Lord of Montpellier from 1213 to 1276; King of Majorca from 1231 to 1276; and Valencia from 1238 to 1276 and Count of Barcelona. His long reign—the longest of any Iberian monarch—saw the expansion of the Crown of Aragon in three directions: Languedoc to the north, the Balearic Islands to the southeast, and Valencia to the south. By a treaty with Louis IX of France, he achieved the renunciation of any possible claim of French suzerainty over the County of Barcelona and the other Catalan counties, while he renounced northward expansion and taking back the once Catalan territories in Occitania and vassal counties loyal to the County of Barcelona, lands that were lost by his father Peter II of Aragon in the Battle of Muret during the Albigensian Crusade and annexed by the Kingdom of France, and then decided to turn south. Read more on Wikipedia

James I of Aragon is most famous for his conquest of Valencia.

Page views of James I of Aragons by language

Among politicians, James I of Aragon ranks 966 out of 15,577. Before him are George Marshall, Astyages, Harold Wilson, Kayqubad I, Gediminas, and Lorenzo de' Medici, Duke of Urbino. After him are Guangxu Emperor, Peter II of Yugoslavia, Constantine II, Ferdinand I of Romania, Abolhassan Banisadr, and Casimir III the Great.

Among people born in 1208, James I of Aragon ranks 1. After him are Simon de Montfort, 6th Earl of Leicester and Sempad the Constable. Among people deceased in 1276, James I of Aragon ranks 3. Before him are Pope Gregory X and Pope Adrian V. After him are Pope Innocent V, Ahmad al-Badawi, Vasily of Kostroma, Guido Guinizelli, Coppo di Marcovaldo, and Sempad the Constable.