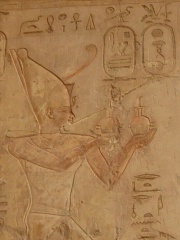 Wahibre Psamtik I (Ancient Egyptian: wꜣḥ-jb-rꜥ psmṯk, known by the Greeks as Psammeticus or Psammetichus (Latinization of Ancient Greek: Ψαμμήτιχος, romanized: Psammḗtikhos), who ruled 664–610 BC, was the first of three kings of that name of the Saite, or Twenty-sixth Dynasty of Egypt. Read more on Wikipedia

Since 2007, the English Wikipedia page of Psamtik I has received more than 413,862 page views. His biography is available in 35 different languages on Wikipedia making him the 1,147th most popular politician.

Page views of Psamtik IS by language

Among politicians, Psamtik I ranks 1,141 out of 14,801. Before him are Antoine of Navarre, Fritz Sauckel, Frederick IV of Denmark, Juan Antonio Samaranch, Huni, and Nikephoros III Botaneiates. After him are Agrippina the Elder, Jacques Necker, Agha Mohammad Khan Qajar, Majorian, Georgy Lvov, and Francesco I Sforza.

Others Deceased in 610 BC