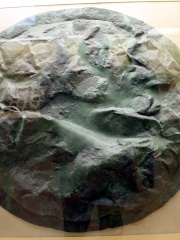 Tyrtaeus (; Greek: Τυρταῖος Tyrtaios; fl. mid-7th century BC) was a Greek elegiac poet from Sparta. He wrote at a time of two crises affecting the city: a civic unrest threatening the authority of kings and elders, later recalled in a poem named Eunomia ("Law and Order"), where he reminded citizens to respect the divine and constitutional roles of kings, council, and demos; and the Second Messenian War, during which he served as a sort of "state poet", exhorting Spartans to fight to the death for their city. Read more on Wikipedia

Tyrtaeus is most famous for his poems that were written to encourage the Spartans to fight against the Athenians.

Page views of Tyrtaeuses by language

Among people born in 700 BC, Tyrtaeus ranks 7. Before him are Lucius Tarquinius Priscus, Astyages, Cyaxares, Arion, Psamtik I, and Jeconiah. After him are Amasis II, Anacharsis, Phalaris, Periander, Psamtik II, and Necho I. Among people deceased in 700 BC, Tyrtaeus ranks 4. Before him are Hesiod, Isaiah, and Gyges of Lydia. After him are Achaemenes, Jehoahaz of Judah, Cylon of Athens, Perdiccas I of Macedon, Ariaramnes, Callinus, Shebitku, and Theopompus of Sparta.