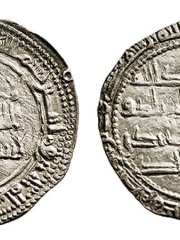 Abd ar-Rahman II (Arabic: عبد الرحمن الأوسط‎) (792–852) was the fourth Umayyad Emir of Córdoba in the Al-Andalus Iberia from 822 until his death. Abd ar-Rahman II was born in Toledo, the son of Emir Al-Hakam I. In his youth he took part in the so-called "massacre of the ditch", when from 700 to 5,000 people came to pay homage to the princes who were killed by order of Al-Hakam. He succeeded his father as Emir of Córdoba in 822 and engaged in nearly continuous warfare against Alfonso II of Asturias, whose southward advance he halted (822–842). Read more on Wikipedia

Among politicians, Abd al-Rahman II ranks 1,807 out of 15,710. Before him are Fanny Kaplan, Sanakht, Carloman, Archduchess Maria Elisabeth of Austria, Publius Clodius Pulcher, and James IV of Scotland. After him are Sheikh Mujibur Rahman, Sophia Alekseyevna of Russia, Burhanuddin Rabbani, John VI of Portugal, 1st Dalai Lama, and Rodion Malinovsky.