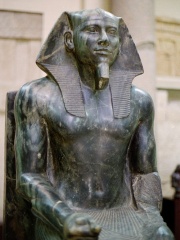 Khafre (also read as Khafra and Greek: Χεφρήν Khephren or Chephren) was an ancient Egyptian King (pharaoh) of the 4th Dynasty during the Old Kingdom. He was the son of Khufu and the successor of Djedefre. According to the ancient historian Manetho, Khafre was followed by king Bikheris, but according to archaeological evidence he was instead followed by king Menkaure. Read more on Wikipedia

Khafra is most famous for the Great Sphinx of Giza, a colossal statue of a lion with a human head.

Page views of Khafras by language

Among politicians, Khafra ranks 349 out of 15,577. Before him are Constantine XI Palaiologos, Joachim Murat, Abbas the Great, François Mitterrand, Muhammad Ali of Egypt, and Charles V of France. After him are Turhan Hatice Sultan, Hafsa Sultan, Mustafa II, Stepan Bandera, Philip I of Castile, and Cambyses II.