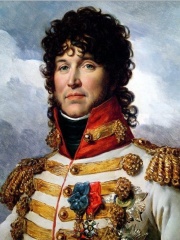 Joachim Murat ( mure-AH, also muurr-AHT, French: [ʒɔaʃɛ̃ myʁa]; Italian: Gioacchino Murati; 25 March 1767 – 13 October 1815) was a French military commander and statesman who served during the French Revolutionary Wars and Napoleonic Wars. Under the French Empire he received the military titles of Marshal of the Empire and Admiral of France. He was the 1st Prince Murat, Grand Duke of Berg from 1806 to 1808 and King of Naples as Joachim-Napoleon (Italian: Gioacchino Napoleone) from 1808 to 1815. Read more on Wikipedia

Joachim Murat is most famous for being a Marshal of France and King of Naples.

Among politicians, Joachim Murat ranks 344 out of 15,577. Before him are Alexander Dubček, Elagabalus, Philip III of Spain, Victor Emmanuel III of Italy, Nerva, and Constantine XI Palaiologos. After him are Abbas the Great, François Mitterrand, Muhammad Ali of Egypt, Charles V of France, Khafra, and Turhan Hatice Sultan.