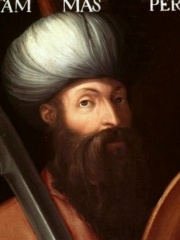 Tahmasp I (; Persian pronunciation: [tæhˈmɒːseb], Persian: شاه تهماسب یکم‎) (22 February 1514 – 14 May 1576) was an influential Shah of Iran, who enjoyed the longest reign of any member of the Safavid dynasty. He was the son and successor of Ismail I. He came to the throne aged ten in 1524 and came under the control of the Qizilbash who formed the backbone of the Safavid Empire. The Qizilbash leaders fought among themselves for the right to be regents over Tahmasp, and by doing so held most of the effective power in the empire. Read more on Wikipedia

Since 2007, the English Wikipedia page of Tahmasp I has received more than 271,386 page views. His biography is available in 39 different languages on Wikipedia making him the 548th most popular politician.

Page views of Tahmasp IS by language

Among politicians, Tahmasp I ranks 544 out of 14,801. Before him are Kim Dae-jung, Rudolf I of Germany, Macrinus, James Monroe, Caesarion, and Georgy Malenkov. After him are Hussein of Jordan, Arnulf of Carinthia, Georgi Dimitrov, Richard II of England, Christian II of Denmark, and Louis VI of France.