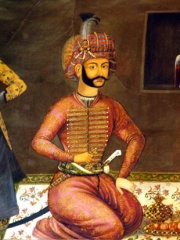 Shah Abbas II (Persian: شاه عباس دوم‎, romanized: Shāh Abbās) (30 August 1632 – 26 October 1666), was the seventh Safavid king (shah) of Iran, ruling from 1642 to 1666. Born Soltan Mohammad Mirza, he was the eldest son of Safi I with his Circassian wife, Anna Khanum. Abbas II was undoubtedly the most capable and energetic Safavid shah after his great-grandfather Shah Abbas I the Great (r. Read more on Wikipedia

Since 2007, the English Wikipedia page of Abbas II of Persia has received more than 88,394 page views. His biography is available in 37 different languages on Wikipedia making him the 1,781st most popular politician.

Page views of Abbas II of Persias by language

Among politicians, Abbas II of Persia ranks 1,770 out of 14,801. Before him are Vittorio Emanuele Orlando, Marcelo Caetano, Baasha of Israel, José Antonio Primo de Rivera, Svatopluk I of Moravia, and Karl Hermann Frank. After him are Pang Tong, Shah Rukh, Fahri Korutürk, Cyaxares, Emperor Xian of Han, and Abu Ubaidah ibn al-Jarrah.