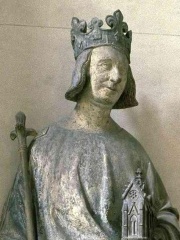 Charles V (21 January 1338 – 16 September 1380), called the Wise (French: le Sage; Latin: Sapiens), was King of France from 1364 to his death in 1380. His reign marked an early high point for France during the Hundred Years' War, with his armies recovering much of the territory held by the English, and successfully reversed the military losses of his predecessors. Charles became regent of France when his father John II was captured by the English at the Battle of Poitiers in 1356. Read more on Wikipedia

Charles V of France is most famous for being the ruler of France from 1364 to 1422. He was also the ruler of Spain, the Holy Roman Emperor, and the King of Germany.

Page views of Charles V of Frances by language

Among politicians, Charles V of France ranks 348 out of 15,577. Before him are Nerva, Constantine XI Palaiologos, Joachim Murat, Abbas the Great, François Mitterrand, and Muhammad Ali of Egypt. After him are Khafra, Turhan Hatice Sultan, Hafsa Sultan, Mustafa II, Stepan Bandera, and Philip I of Castile.