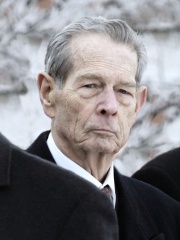 Michael I of Romania

Michael I (Romanian: Mihai I [miˈhaj]; 25 October 1921 – 5 December 2017) was the last king of Romania, reigning from 20 July 1927 to 8 June 1930 and again from 6 September 1940 until his forced abdication on 30 December 1947. Shortly after Michael's birth, his father, Crown Prince Carol, had become involved in a controversial relationship with Magda Lupescu. In 1925, Carol was pressured to renounce his rights to the throne and moved to Paris in exile with Lupescu. In 1927, Michael ascended the throne, following the death of his grandfather Ferdinand I. Read more on Wikipedia

Michael I of Romania was the first King of Romania, reigning from 20 July 1927 to 8 June 1930. He was the son of King Ferdinand I and a grandson of Queen Victoria.

Page views of Michael I of Romanias by language

Among politicians, Michael I of Romania ranks 650 out of 15,577. Before him are Miloš Zeman, Jalal ad-Din Mingburnu, Igor of Kiev, Jean-Bédel Bokassa, Margaret of Austria, Duchess of Savoy, and Edmund Burke. After him are Suharto, Kliment Voroshilov, Tiberius Gracchus, Daniel Ortega, Benjamin Netanyahu, and Edward the Elder.