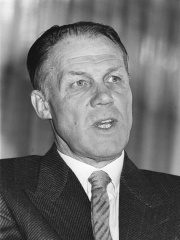 Marinus Jacobus Hendricus Michels OON (Dutch pronunciation: [ˈmɪxəls]; 9 February 1928 – 3 March 2005) was a Dutch football player and coach. He played his entire career for AFC Ajax, which he later managed, and played for and later managed the Netherlands national team. He is regarded as one of the greatest managers of all time.Michels became most notable for his coaching achievements; he won the European Cup with Ajax and the Spanish league with Barcelona, and had four tenures as coach of the Netherlands national team, who he led to reach the final of the 1974 FIFA World Cup and to win the 1988 UEFA European Championship.He is credited with the invention of a major football playing style and set of tactics known as "Total Football" in the 1970s. Read more on Wikipedia

Rinus Michels is most famous for his "total football" tactic, where players can play in any position and interchange positions during the game.