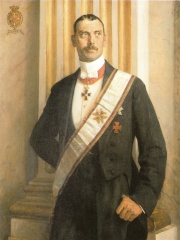 Christian X (Danish: Christian Carl Frederik Albert Alexander Vilhelm; 26 September 1870 – 20 April 1947) was King of Denmark from 1912 to 1947, and the only King of Iceland (as Kristján X) between 1918 and 1944. He was a member of the House of Glücksburg, a branch of the House of Oldenburg, and the first monarch since King Frederick VII born into the Danish royal family; both his father and his grandfather were born as princes of a ducal family from Schleswig. Among his siblings was King Haakon VII of Norway. Read more on Wikipedia

Christian X was the King of Denmark from 1912 to 1947. He was a member of the House of Glücksburg and the first king of Denmark to be born in the 20th century. He became king on the death of his father Frederick VIII.

Page views of Christian X of Denmarks by language

Among politicians, Christian X of Denmark ranks 716 out of 15,710. Before him are Ahmose I, Manuel II Palaiologos, Sima Yi, Grigory Potemkin, Sargon II, and Jean-Baptiste Colbert. After him are Al-Ma'mun, Hong Taiji, Charles XIII of Sweden, Cosimo I de' Medici, Grand Duke of Tuscany, Shunzhi Emperor, and Ptolemy XIII Theos Philopator.