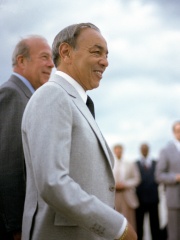 Hassan II (Arabic: الْحسْنُ الثاني بْن مُحَمَّدُ بْن يوسف بْن الْحسْنِ بْن الشَّرِيفِ بْن عَلِيُّ الْعَلَوِيِّ‎, or simply الحسن الثاني al-ḥasan ath-ṯhānī, Maghrebi Arabic: el-ḥasan ettāni,) (9 July 1929 – 23 July 1999) was the King of Morocco from 1961 until his death in 1999. A member of the Alaouite dynasty, which has ruled the country since the mid 17th century, he was the eldest son of Mohammed V, Sultan, and then King, of Morocco (1909–1961), and his second wife, Lalla Abla bint Tahar (1909–1992). Read more on Wikipedia

Hassan II of Morocco is most famous for being the longest reigning monarch in the world. He ruled from 1961 to 1999.

Page views of Hassan II of Moroccos by language

Among politicians, Hassan II of Morocco ranks 850 out of 15,710. Before him are Ali Pasha of Ioannina, Jadwiga of Poland, Eduard Bernstein, Stanisław Leszczyński, Julius Nepos, and Jozef Tiso. After him are Henry Stuart, Lord Darnley, Richard von Coudenhove-Kalergi, Béla Kun, Louis, Duke of Burgundy, Valentinian II, and Shamil, 3rd Imam of Dagestan.