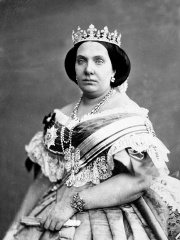 Isabella II (Spanish: Isabel II; 10 October 1830 – 9 April 1904), was Queen of Spain from 29 September 1833 until 30 September 1868. Shortly before her birth, the King Ferdinand VII of Spain issued a Pragmatic Sanction to ensure the succession of his firstborn daughter, due to his lack of a son. She came to the throne a month before her third birthday, but her succession was disputed by her uncle the Infante Carlos (founder of the Carlist movement), whose refusal to recognize a female sovereign led to the Carlist Wars. Read more on Wikipedia

Page views of Isabella II of Spains by language

Among politicians, Isabella II of Spain ranks 769 out of 15,710. Before her are Chandragupta Maurya, William I of the Netherlands, Michael I of Romania, Nicolas Sarkozy, Valéry Giscard d'Estaing, and Balian of Ibelin. After her are Ferdinand I of Bulgaria, François Hollande, Trygve Lie, Alexander Kerensky, Henry VII, Holy Roman Emperor, and Lavrentiy Beria.