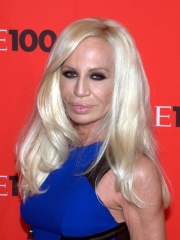 Donatella Francesca Versace (Italian: [donaˈtɛlla franˈtʃeska verˈsaːtʃe]; born 2 May 1955) is an Italian fashion designer, businesswoman, socialite, and model. She is the sister of Gianni Versace, founder of the luxury fashion company Versace, with whom she worked closely on the development of the brand and in particular its combining of Italian luxury with pop culture and celebrity. Upon Gianni's death in 1997, she inherited a portion of the Versace brand and became its creative director. Read more on Wikipedia

Donatella Versace is most famous for being the youngest daughter of Gianni Versace, the founder of Versace. She is also a fashion designer and has been the creative director of Versace since 1997.

Among FASHION DESIGNERS In Italy