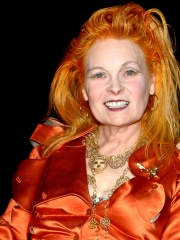 Dame Vivienne Isabel Westwood (née Swire; born 8 April 1941) is an English fashion designer and businesswoman, largely responsible for bringing modern punk and new wave fashions into the mainstream.Westwood came to public notice when she made clothes for Malcolm McLaren's and her boutique in the King's Road, which became known as SEX. Their ability to synthesise clothing and music shaped the 1970s UK punk scene which was dominated by McLaren's band, the Sex Pistols. Read more on Wikipedia

Vivienne Westwood is most famous for her designs for the punk movement in the 1970s.

Among FASHION DESIGNERS In United Kingdom