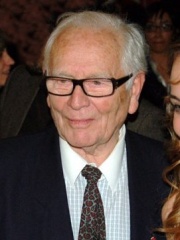 Pierre Cardin (UK: , US: , French: [pjɛʁ kaʁdɛ̃]; born Pietro Cardin on 2 July 1922) is an Italian-born naturalised-French fashion designer. He is known for his avant-garde style and his Space Age designs. He prefers geometric shapes and motifs, often ignoring the female form. Read more on Wikipedia

Since 2007, the English Wikipedia page of Pierre Cardin has received more than 837,930 page views. His biography is available in 35 different languages on Wikipedia making him the 5th most popular fashion designer.