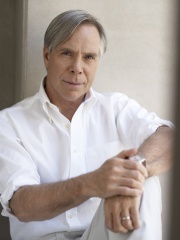 Thomas Jacob Hilfiger (/hɪlˈfɪgər/; born March 24, 1951) is an American fashion designer and founder of Tommy Hilfiger Corporation.After starting his career by co-founding a chain of jeans/fashion stores called People's Place in upstate New York in the 1970s, he began designing preppy clothing for his own eponymous menswear line in the 1980s. The company later expanded into women's clothing and various luxury items such as perfumes and went public in 1992.Hilfiger's collections are often influenced by the fashion of music subcultures and marketed in connection with the music industry, with celebrities such as American R&B artist Aaliyah in the 1990s. In 2005, contestants in the CBS reality show The Cut competed for a design job with Hilfiger in a similar fashion to The Apprentice. Read more on Wikipedia

Among FASHION DESIGNERS In United States