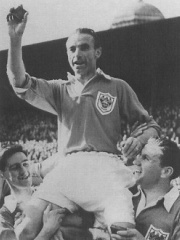 Sir Stanley Matthews, CBE (1 February 1915 – 23 February 2000) was an English footballer who played as an outside right. Often regarded as one of the greatest players of the British game, he is the only player to have been knighted while still playing football, as well as being the first winner of both the European Footballer of the Year and the Football Writers' Association Footballer of the Year awards. Matthews' nicknames included "The Wizard of the Dribble" and "The Magician".Matthews kept fit enough to play at the top level until he was 50 years old. Read more on Wikipedia

Stanley Matthews was a Welsh footballer who played for Stoke City and Blackpool. He is most famous for his dribbling skills, and was the first player to be knighted while still playing.