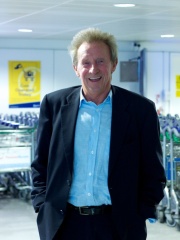 Denis Law (born 24 February 1940) is a Scottish former footballer who played as a forward. His career as a football player began at Second Division Huddersfield Town in 1956. After four years at Huddersfield, he was signed by Manchester City for an estimated transfer fee of £55,000, which set a new British record. Read more on Wikipedia

Since 2007, the English Wikipedia page of Denis Law has received more than 1,127,663 page views. His biography is available in 43 different languages on Wikipedia making him the 97th most popular soccer player.