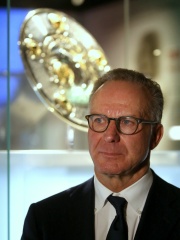 Karl-Heinz "Kalle" Rummenigge (German: [ˌkaʁlˈhaɪnts ˈkalə ˈʁʊmənɪɡə]; born 25 September 1955) is a German football executive and former professional player. He was the longtime Chairman of Executive Board of FC Bayern München AG, a daughter company of German Bundesliga team Bayern Munich. As a player, Rummenigge had his greatest career success with Bayern Munich, where he won the Intercontinental Cup, two European Cups, as well as two league titles and two domestic cups. Read more on Wikipedia

Karl-Heinz Rummenigge is most famous for being a German football player and the current chairman of the European Club Association.