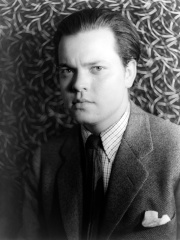 George Orson Welles (May 6, 1915 – October 10, 1985) was an American director, actor, screenwriter, and producer who is remembered for his innovative work in radio, theatre and film. He is considered to be among the greatest and most influential filmmakers of all time.While in his 20s, Welles directed high-profile stage productions for the Federal Theatre Project, including an adaptation of Macbeth with an entirely African American cast and the political musical The Cradle Will Rock. In 1937, he and John Houseman founded the Mercury Theatre, an independent repertory theatre company that presented a series of productions on Broadway through 1941, including Caesar (1937), an adaptation of William Shakespeare's Julius Caesar. In 1938, his radio anthology series The Mercury Theatre on the Air gave Welles the platform to find international fame as the director and narrator of a radio adaptation of H. G. Read more on Wikipedia

Orson Welles is most famous for being the director and star of the 1938 radio broadcast of War of the Worlds, which caused widespread panic.