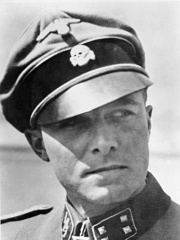 Joachim Peiper (30 January 1915 – 14 July 1976) was a German Schutzstaffel (SS) officer and a Nazi war criminal convicted for the Malmedy massacre of U.S. Army prisoners of war (PoW). During the Second World War in Europe, Peiper served as personal adjutant to Heinrich Himmler, leader of the SS, and as a tank commander in the Waffen-SS. As adjutant to Himmler, Peiper witnessed the SS implement the Holocaust with ethnic cleansing and genocide of Jews in Eastern Europe; facts that he obfuscated and denied in the post–War period. As a tank commander, Peiper served in the 1st SS Panzer Division Leibstandarte SS Adolf Hitler (LSSAH) in the Eastern Front and in the Western Front, first as a battalion commander and then as a regimental commander. Read more on Wikipedia

Joachim Peiper was a German SS officer during World War II. He is most famous for being the commander of the Leibstandarte Adolf Hitler, a Waffen-SS Panzer division, and for his involvement in the Malmedy massacre.