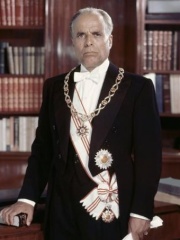 Habib Bourguiba (; Arabic: الحبيب بورقيبة, romanized: al-Ḥabīb Būrqībah; 3 August 1903 – 6 April 2000) was a Tunisian lawyer, nationalist leader and statesman who led the country from 1956 to 1957 as the prime minister of the Kingdom of Tunisia (1956–57) then as the first president of Tunisia (1957–87). Prior to his presidency, he led the nation to independence from France, ending the 75-year-old protectorate and earning the title of "Supreme Combatant". Born in Monastir to a poor family, he attended Sadiki College then Lycée Carnot in Tunis, before obtaining his baccalaureate in 1924. Read more on Wikipedia

Habib Bourguiba was the first president of Tunisia. He is most famous for his modernization efforts, including making education free and mandatory.

Among politicians, Habib Bourguiba ranks 1,079 out of 15,577. Before him are Klas Pontus Arnoldson, Ariq Böke, Dionysius I of Syracuse, Alfredo Stroessner, Rashid-al-Din Hamadani, and Shaka. After him are Emperor Kōmei, Nabopolassar, Eric XIV of Sweden, David Lloyd George, Alpha Condé, and William Henry Harrison.