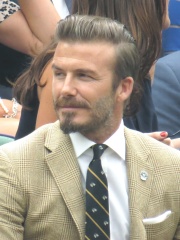 David Robert Joseph Beckham (UK: ; born 2 May 1975) is an English former professional footballer, the current president and co-owner of Inter Miami CF and co-owner of Salford City. Known for his range of passing, crossing ability and bending free-kicks as a right winger, Beckham has been hailed as one of the greatest and most recognisable midfielders of his generation, as well as one of the best set-piece specialists of all time. He is the first English player to win league titles in four countries: England, Spain, the United States and France. Read more on Wikipedia

The Guardian
David Beckham and a Manchester United bid – what could go wrong? | Marina Hyde
There is no more elegant pivot than moaning about the World Cup in Qatar to begging a Gulf state to come and buy your club“When I want a peerage,” sniffed Alfred Harmsworth (later Lord Northcliffe), “I shall buy one like an honest man.” So yes: I want to begi…
Marina Hyde
Independent
Voices: This could be the downfall of national labrador David Beckham
Comedian Joe Lycett issued a challenge to Beckham: pull out of his World Cup deal or he (Lycett) would shred £10,000 of his own money on live TV – which he did (except, of course, he didn’t)
Victoria Richards
Mirror Online
David Beckham makes allegiance clear to USA fans after making World Cup jibe
David Beckham watched England's 0-0 World Cup draw against the United States at the Al Bayt Stadium on Friday after controversially becoming an ambassador for Qatar
[email protected] (Tom Blow)
Mirror Online
'David Beckham risks destroying his reputation by accepting money from Qatar'
Saira Khan says David Beckham is in danger of undermining all the good work he has done for charity over the years – for UNICEF, Aids charities, kids’ sports development
[email protected] (Saira Khan)