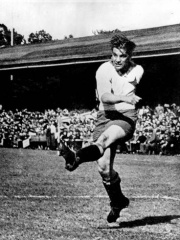 Nils Gunnar Nordahl (pronounced [ˈɡɵ̌nːar ˈnûːɖɑːl]; 19 October 1921 – 15 September 1995) was a Swedish professional footballer. A highly prolific, powerful, and physically strong striker, with an eye for goal, he is best known for his spell at AC Milan from 1949 to 1956, in which he won the Scudetto twice, and also the title of pluricapocannoniere, with an unprecedented five top scorer (Capocannonieri) awards, more than any other player in the history of the Italian championship.Nordahl is Milan’s all-time record goalscorer, and he long held the record for most goals for a single club in the history of Italian league, before being surpassed by Francesco Totti in January 2012. Read more on Wikipedia

Gunnar Nordahl was a Swedish footballer who was most famous for his time with Italian club AC Milan. He helped them win the Serie A title in 1951 and 1952, and the Coppa Italia in 1953.